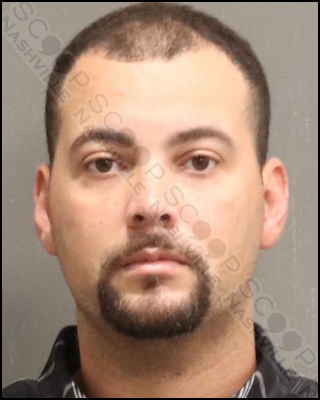 31-year-old Dusty Hallock is free on a $6,000 bond, but that’s after weeks of his ex-girlfriend begging police to even arrest him. The couple broke up in February, and he has refused to stop contacting her. The victim, Courtney Baird, has made report after report of his activities thru March when she also obtained an order of protection which was not served. In late March, she also obtained a criminal stalking warrant which was unserved until his current arrest. She was afraid to even return to her own apartment for most of the month of March, and when she did the locks had been changed, however, her management confirmed they didn’t make the changes, and it wasn’t even their type of locks. When she returned she heard audible pings from inside her closet and discovered an Apple AirTag had been hidden inside a purse, and her clothing had been disturbed. She was then near Smyrna when she got an alert she was being tracked by another AirTag, and alerted authorities there, who located it attached to her vehicle with a magnet. Hallock was eventually arrested this week, spending a few hours before bonding out on the charges of stalking, motor vehicle tracking, and aggravated criminal trespass.

Dusty Shane Hallock was booked into the Metro Nashville Jail on April 18th, charged with electronic tracking of a motor vehicle, aggravated criminal trespass, and stalking. He is free on a $6,000 bond to his 4006 Windwong Trail address in Greenbrier, TN