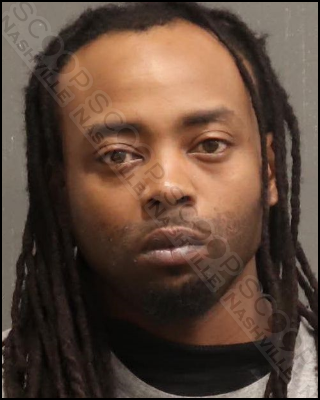 Police say a security camera caught 27-year-old Myron ‘Tank’ Perry entering the locked bedroom door of his ex-girlfriend (who is also his current roommate with separate bedrooms), and leaving with something in his hands. He returns again, enters the room, and exits with a flat item this time. The victim, Kayla Currie, was notified of the activity via an app on her phone. She returned home to find $700 in cash and an Amazon Fire Tablet missing from her bedroom. Perry is charged with felony burglary, and told police he never entered the bedroom, despite him clearly doing so on the recording, which was archived for court.

Myron Perry was booked into the Metro Nashville Jail on April 19th, charged with felony burglary. He is free on a $5,000 bond to his 110 Harris Street address in Goodlettsville.