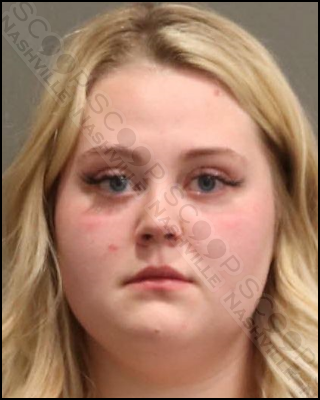 When police asked 33-year-old Paige Hauff why she was driving with no headlights on thru East Nashville in the early hours of Sunday morning, she simply stated “because I was in front of another car and I didn’t want to be rude”… she would later clarify that she meant she had been ‘parked’ in front of another car earlier and had not turned them back on while driving inbound on Gallatin Pike. Officers say she was obviously intoxicated, and she admitted to drinking two vodka drinks prior to driving. She also stated she had Zoloft and used a marijuana vape pen, which was with her. She also had empty Tiny Bomb beer cans, and an empty Ranch Water can in the vehicle. Hauff was transported to booking and her car towed to impound.

Paige E Hauff was booked into the Metro Nashville Jail on April 24th, charged with driving under the influence (DUI). A commissioner set her bond at $2,000 and she was released to her 2300 9th Ave. South address in Nashville.