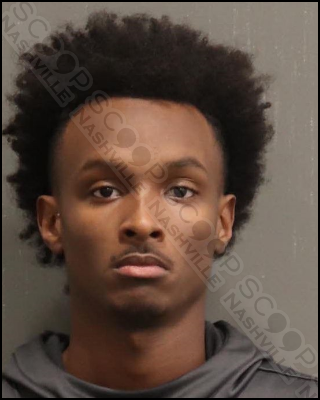 Four teens were arrested Saturday night after participating in the dangerous trending Nationwide TikTok Orbeez/Splat Gun Challenge. In the challenge, participants shoot unsuspecting people with gel-type pellets from Orbeez guns, some of which look like handguns and even rifles. They then post the videos on TikTok to share for engagement. Saturday night, four teens, including Ian Brown and Nashaud White, and two 17-year-old juveniles, shot the gel pellets from a moving Kia sedan on Broadway at unsuspecting people walking on Broadway. Once police stopped the vehicle, they also found an actual loaded (and stolen) handgun.

Ian Brown admitted all parties had shot the guns, and officers located two Orbeez guns inside the vehicle. In the back seat was Nashaud White, who also admitted he had been smoking marijuana. Next to him on the floorboard of the vehicle was a loaded a stolen 9mm SCCY handgun. White stated he “found it on the ground today”.

A spokesperson for the Metro Nashville Police Department said “Officers have no tolerance for this.  Not only were there 2 pellet guns in the vehicle but a real loaded gun as well.  We, the police department, take this behavior very seriously.”

Ian T. Brown,18, was booked into the Metro Nashville Jail on April April 30th, charged with disorderly conduct. A commissioner set his bond at $1,000 and he was given pre-trial release to his 608 Cayce Drive address in Clarksville, TN, in just under 3 hours from the time he was booked.

Nashaud White, 18, was booked into the Metro Nashville Jail on April 30th, charged with illegal possession of a handgun (due to his age), disorderly conduct, and possession of a weapon under the influence. A commissioner set his bond at $3,000 and he was given pre-trial release to his 92 Bradford Alley in Clarksville, TN, in just under 3 hours from the time he was booked.

The two 17-year-olds were booked at juvenile court.