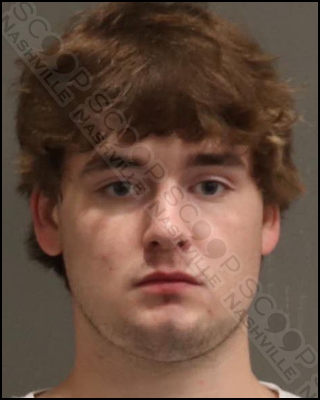 Officers working the Entertainment District Initiative in downtown Nashville watched as 21-year-old James Brooks fell to the ground near 6th & Broadway. As they approached him to assist, they observed his extreme level of intoxication, and attempted to help him stand, however, he had trouble standing and walking on his own, and much of his speech was slurred and was not forming complete phrases. Officers asked him to call a friend to come to get him, however, he repeatedly just opened the camera app on his phone. Officers attempted to assist him with using his phone to arrange an Uber, however, he kept giving his address as “zero”.With no other options available, he was transported to booking, and charged with public intoxication.

James Brooks was booked into the Metro Nashville Jail on May 1st, charged with public intoxication. A commissioner set his bond at $100.