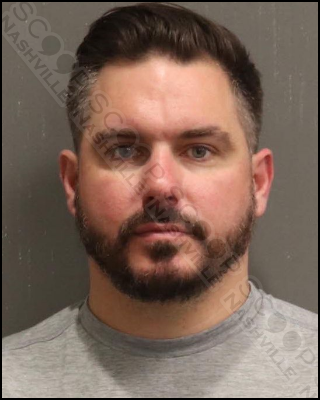 Tiffany Lea says the argument with her on-again/off-again boyfriend of two years, 41-year-old Andrew Wright, began when he refused to follow her back on social media after the two recently reunited and he spent the night at her home. The morning after, she confronted him about why he wouldn’t follow her back, eventually demanding he deletes the photos of her from his cell phone. When he wasn’t satisfied they were also removed from the ‘deleted’ items, too, she took his phone and went to the bathroom to make the deletions herself.

That’s when she found nude photos of other women in a ‘hidden’ folder on his phone. She says he then entered the bathroom and pushed her back with his hands around he throat. She broke away, and he jumped on a conference call for work. While he was going that she demanded he leaves and told him she had viewed the ‘hidden’ images. She says he once again charged at her and strangled her against the counter, breaking part of it. She says he continued the assault throughout the house, pushing and jumping on top of her while asking “Is this what you want?”. He then tossed an ottoman at her. Officers documented the broken cabinet and multiple injuries on the victim.

Andrew M. Wright, of Nashville, was booked into the Metro Nashville Jail on May 2nd, charged with aggravated assault/strangulation and vandalism. A commissioner set his bond at $16,000.