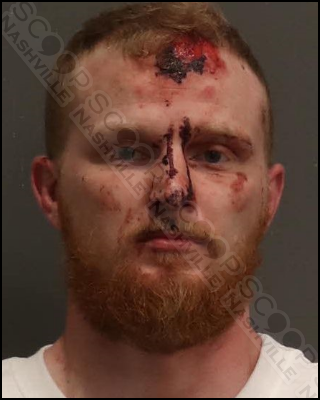 Metro Nashville Police found 25-year-old Dustin Swann, described as a bloody ginger with a ripped shirt, near 3rd & Demonbreun in downtown Nashville, where he had stumbled after fighting with multiple patrons at the FGL House bar. When Officer Forrest Punke approached the heavily intoxicated man, Swann pushed Punke in the chest with his hands, knocking him backward with substantial force. He also battled with Officer Joshua Zambrano-Vera as he attempted to place him into custody. Eventually secured by cuffs, Swann continued to be hostile and shout at patrons.

Dustin N Swann, of Castle Heights Road in Tompkinsville, KY, was booked into the Metro Nashville Jail on April 30th, charged with public intoxication, aggravated assault on a first responder, resisting arrest, and disorderly conduct. A commissioner set his bond at $1,750, and he was given pre-trial release.