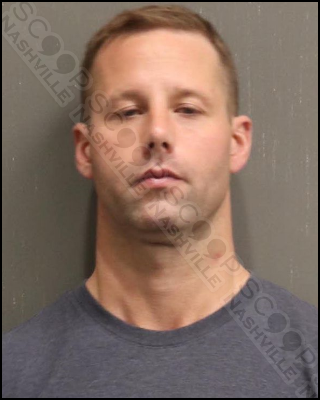 38-year-old Nashville Realtor Rob Mize reeked of alcohol, according to police, as they encountered him at his wrecked vehicle near West End Ave & Natchez Trace, where he had hit the curb and damaged his right side tire and bumper. He stepped out of his vehicle as officers approached, and he stumbled around the vehicle and talked with slurred speech. The Synergy Realtor told officers he believed someone had hit him and asked if they had seen anyone else in the area. He claimed he had nothing to drink and had been “with friends down the street” but would not be more specific. Police say Mize was so intoxicated they had to hold him upright while he was being searched incident to arrest.

Robert Mize, of Barrett Road in Nashville, was booked into Metro Nashville Jail on May 6th, charged with driving under the influence (DUI) and violation of the implied consent law. A commissioner set his bond at $2,500, and the Davidson County Sheriff’s Office gave him pre-trial release from their facility.