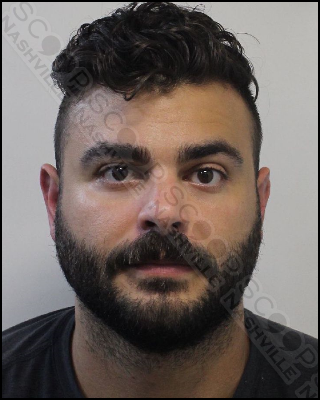 In January of 2018, police say 29-year-old Trevor Forbess was pulled over on Woodland Street in East Nashville due to expired tags on his vehicle. Upon checking his driver’s license, Officer James Smith discovered it was suspended. He then issued Forbess a state citation to self-book on the charge, however, Forbes never did. Four years later, Trevor Forbess was booked into the jail this week on the outstanding warrant.

Trevor James Forbess, of Curtis Steet in Nashville, was booked into the Metro Nashville Jail on May 5th, and charged on the outstanding citation for driving on a suspended license. A commissioner set his bond at $100, and the Davidson County Sheriff’s Office gave him pre-trial release from their facility.

Editor’s note: Trevor Forbess was booked under an incurred spelling of his last name in the JIS. He is booked as “Trevor Forbes” in all systems. The original citation uses the correct spelling of ‘Forbess’.