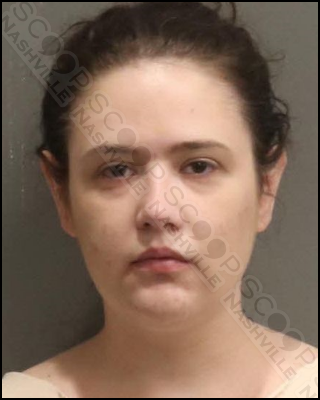 A concerned citizen observed 31-year-old Emily Warren drunk driving while nearly passed out near the intersection of N 11th St and Gallatin Ave in East Nashville. They convinced her to pull to the side of the road and took the keys from her ignition while waiting on police to arrive. Officers made contact with the woman, who told them she had one “tiki drink.” She was unable to complete field sobriety tests due to her level of intoxication. Once at booking, she blew a 0.372% BAC on a breathalyzer test — more than four times the legal limit. A range of 0.35% to 0.40% generally represents potentially fatal alcohol poisoning. 0.40% is the accepted lethal dose for about 50% of adult humans.

Emily E Warren was booked into the Metro Nashville Jail on May 11th, charged with driving under the influence (DUI). A commissioner set her bond at $3,000, and the Davidson County Sheriff’s Office gave her pre-trial release from their facility.