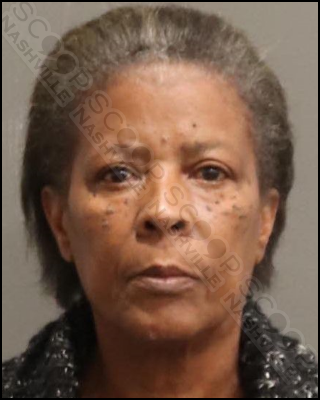 67-year-old Brenda Ross is free on a new $2,500 bond after being jailed on a new felony aggravated stalking charge this weekend. The Nashville socialite who hobnobs with the like of the District Attorney, The Mayor, and sitting judges, was initially arrested on May 9th for violating an order of protection. The new warrant, which was signed on May 11th, details multiple instances of Ross sending messages to the victim, Marilyn Jones, via social media, showing up at Jazzy’s where she knew the victim to be, only to sit across the bar and stare at her without saying anything. Once the victim left and went to Larry’s Bar, Ross followed her there. The victim continues to feel harassed and stalked by Ross.

Brenda Ross was booked into the Metro Nashville Jail on May 13th, charged with felony aggravated stalkikng. She is free on a $2,500 bond. At the time of the arrest, she was free on a $1,500 bond from earlier in the week for violating an order of protection.

67-year-old Brenda Ross has been involved in more entanglements in the last two months than some folks experience in two decades. In March, Jacinta West received an order of protection against Ross after she said Ross, who was one of the first members of Nashville’s Police Community Oversight Board, stalked her. The two share a circle of friends, some of who warned that Ross had posted on social media alluding she was going o fuck them up and that she was “going to get them.” West says Ross then followed and chased her one night at might as she was picking up a friend, even pulling up beside her and yelling curse words at her. Previously in January, Ross reportedly grabbed West’s wrist while at a nightclub. West states she remains in fear of Ross, and her “political ties” only make the situation worse. Ross is an East Nashvillian who has served on several mayoral-appointed commissions over the years and can be found hobnobbing with the city’s elite on any given night of the week. Ross was jailed on Monday for violating one of the many current orders of protection. She is free on a $1,500 bond.

On May 4th, Brenda Ross sought an order of protection of her own — against her ex-boyfriend, Clarence Jennings. She says he attempted to assault her physically and solicited others to harass her. She says Clarence moved in wither her in December and stayed until March. She says during that time, he disclosed he had been visiting a swinger’s club in Nashville, and out of curiosity, she followed him there one night, which is where she met Jacinta West from the above order of protection. Most recently, she visited a club on May 1st, and Clarence was also there. She says he stared at her the entire time she was there, and he followed her around. She was taking photos and videos of Clarence during this time. She says he attempted to attack her, however, and several others intervened to stop him.

On May 5th, Marilyn Jones, of Hermitage, came to the family safety center to report that she, too, had an order of protection again Brenda Ross, and it had been violated. The valid order of protection tells of a wild night that started at Sensations and ended at Larrys, during which time Benda reportedly stalked Marilyn, threatened to fight her, talked about how her ass was bigger than hers, attempted to run over her with a car, followed her between the clubs, and had to be restrained from following her home. A full copy of the two-page protective order is below.

Jones reported to police that the previous night, on May 4th, Ross came to yet another bar, S&T Grill, where she knew Jones to be, and sat a few chairs down and stared at her while fidgeting with her purse, where she is known to carry her gun. She stayed there for approximately 45 minutes. Marilyn notified the manager, who refused to get involved as he didn’t want police at the location. A warrant was issued for Ross’ arrest, charging her with violating the order of protection.

Brenda Jane Ross, of Stockell Street in Nashville, was booked into the Metro Nashville Jail on May 9th, charged with violating an order of protection. She is free on a $1,500 bond.