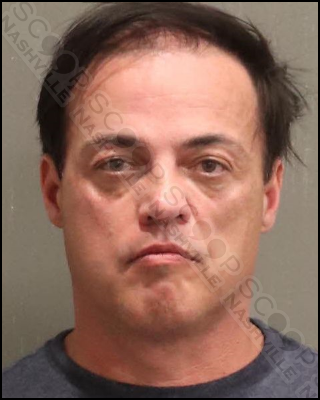 TWRA Boating Officer Joshua Landrum says he noticed a pontoon boat traveling across Percy Priest Lake at 2-3 mph Saturday with no one at the steering wheel. He noticed the two occupants of the boat were seated at the very front of the pontoon boat talking, and 48-year-old Millard Ernest Byrd only returned to the driver’s console after the blue lights were activated on the TWRA boat, at which time he put the throttle in neutral and turned off the ignition. Landrum says the boat operator was obviously intoxicated, and when asked to put on a life jacket, he kept trying to put on a woman’s life jacket, which was much smaller and would not fit him. After performing poorly on field sobriety tests, he was taken into custody on multiple charges.

Millar Ernest Byrd, of Eastmoreland Ave in Mephis, was booked into the Metro Nashville Jail on May 14th, charged with reckless operation of a boat, boating under the influence (BUI), and violation of the implied consent law. A judicial commissioner set his bond at $1,550, and the Davidson County Sheriff’s Office gave him pre-trial release from their facility.