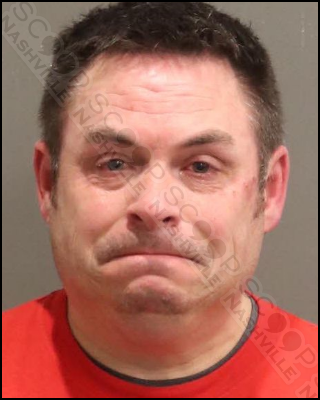 Metro Nashville Police responded to Legends Corner at 428 Broadway for a disorderly person call on Saturday, where they found 43-year-old Jason O’Brian. They say he was so intoxicated he could not stand up straight, and when they told him this fact, he stated, “I am standing up straight!” — but he was not. When asked if he had someone who could care for him or come get him, he said “yes” but refused to provide any further information or point them out. Due to his extreme level of intoxication, he was transported to booking.

Jason O’Brian was booked into the Metro Nashville Jail on May 14th, and charged with public intoxication. A judicial commissioner set his bond at $50.