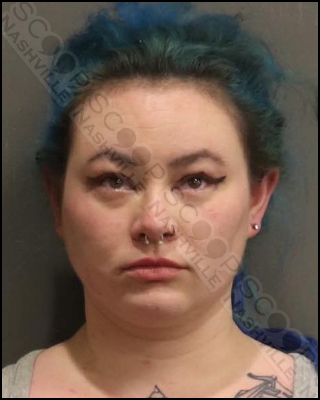 On May 16th, 29-year-old Felicia Andrus called police to her East Nashville location on Woodland Street to report a “missing person”. Officers arrived to find Felicia sitting in her Kia Soul with the keys in the center console of the vehicle. She stepped out to explain that she was attempting to locate her friend who she had been with at 3 Crow Bar, where she drank five green tea shots, four coronas, and a Bushwacker. She lost her friend, and she had his phone, and he had hers. She had been driving around East Nashville looking for him and decided to pull over at this location to seek police to assist in her search. Officers quickly realized she was still heavily intoxicated, and she agreed to perform field sobriety tests, on which she performed poorly. She would eventually blow a 0.227% BAC on a breathalyzer at booking.

Felicia Lynne Andrus, of S 5th Street in East Nashville, was booked into the Metro Nashville Jail on May 16th, and charged with driving under the influence (DUI). A commissioner set her bond at $1,000, and the Davidson County Sheriff’s Office gave her pre-trial release from their facility.