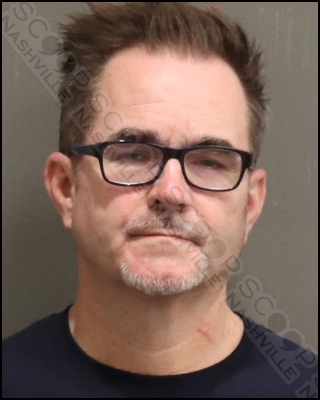 52-year-old Mark Powell was driving on I-24 just before lunch Tuesday as he left his lane and made contact with another vehicle, causing them both to pull to the side of the interstate to file a report. The driver of the impacted vehicle contacted THP, stating that Powell was “not acting right” and was possibly intoxicated. Trooper Priest arrived and Powell claimed there was a deer on the interstate and he swerved to avoid it, but was unable to do so and impacted the deer. However, the other driver stated no deer was present. He then said he ran into the truck and not the deer, then seemed really confused about dates and times, and was holding onto his car for balance. He admitted to taking Xanax and Oxycodone, and states his medicines sometimes cause him to hallucinate.

Mark A. Powell, of Hickory Valley Road in Nashville, was booked into the Metro Nashville Jail on May 24th, charged with driving under the influence (DUI). A commissioner set his bond at $2,000, and the Davidson County Sheriff’s Department gave him pre-trial release from their facility.