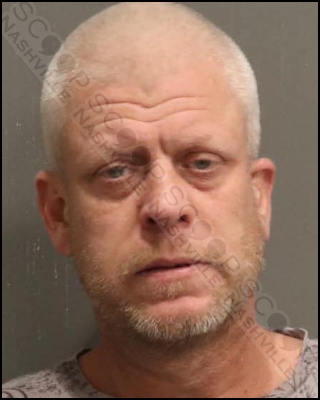 After 47-year-old Curtis Payton crashed his Escalade into a construction zone barrier in North Nashville he told Metro Nashville Police officers he was “done” with trying to perform a one-legged standing during field sobriety testing, stating that he had two margaritas at Las Palmas in West Nashville and was drunk. He further told the officers he “knew their tricks because he has a good attorney” — which is doubtful considering he just fully confessed to drinking and driving with more details than they ever asked for. During a formal interview, he was Mirandized and further stated he had drank two 16oz Dos Equis beers. Still unable to be quiet, he added “I believe that someone put something in my alcohol because I am drunk”. All admissions were recorded on body-worn and in-car cameras.

Curtis D Payton, of Indian Ridge Blvd in White House, TN, was booked into the Metro Nashville Jail on May 23rd, charged with driving under the influence (DUI) and violation of the implied consent law. A commissioner set his bond at $5,000 and the Davidson County Sheriff’s Office gave him pre-trial release from their facility.