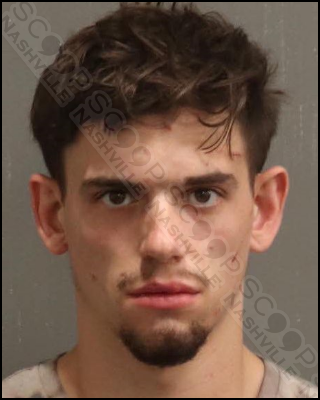 23-year-old Louie Simonyi was found in the entrance to the parking garage of 2111 Belcourt Ave just after 8 a.m. Sunday with dried blood, scratch marks, and cuts on his face, chest, arms, and hands. There was also a glass door from the building into the parking garage which was shattered. He told police he had an argument with his girlfriend, who was not present, and it was “all a misunderstanding”. He claimed the injuries were from a mosh it from a concert the night prior. With so many different stories, security footage was reviewed and it showed at 5:05 a.m. Simonyi appears at the scene and forces the glass door open by yanking on the handle and slamming it against a railing then breaking off the handle and using it to shatter the door.

Louis P. Simonyi, of Dentzler Road in Parma Heights, OH, was booked into the Metro Nashville Jail on May 29th, charged with vandalism. A judicial commissioner set his bond at $1,500 and the Davidson County Sheriff’s Department gave him pre-trial release.

NOTE: Simonyi is booked as ‘Simony’ in the CJIS, DCSO, and MNPD systems in Nashville.