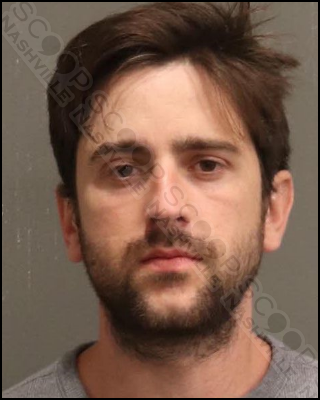 TWRA Officer Joshua Landrum was patrolling Percy Priest Lake Sunday when he noticed a pontoon boat in the ‘no wake’ zone without any registration numbers properly displayed. As he encountered and spoke to the boat operator, 31-year-old Tyler Ruby, he noticed he reeked of alcohol and had slurred speech and glassy eyes. Ruby admitted to drinking “2 or 3 beers” and smoking marijuana prior to operating the boat. After performing poorly on field sobriety tests, Ruby was transported to booking on multiple charges.

Tyler A Ruby, of Lischey Ave in Nashville, was booked into the Metro Nashville Jail on May 29th, charged with boating under the influence (BUI), boating ID number violation, and violation of the implied consent law. A judicial commissioner set his bond at $3,100 and the Davidson County Sheriff’s Office gave him pre-trial release from their facility.