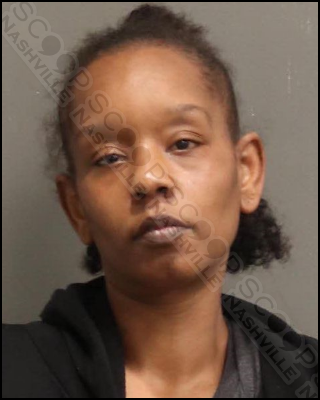 When 39-year-old Shamika Jones crossed into oncoming traffic in an attempt to pass a car and had a head-on collision Wednesday afternoon on Lebanon Pike, she was still smoking a joint when officers arrived on the scene. She reported she had also smoked a bit earlier in the day, on her way to work. She said the last thing she remembered before the crash was leaving her workplace, the Whole Foods in downtown Nashville, and then being in a crash. Inside her car was 1.2 grams of marijuana and a SMC-380 pistol under the driver’s seat. She claimed to have a felony conviction out of California, but officers were unable to locate any such charge.

Shamika J Jones, of Hermitage Park Drive in Hermitage, was booked into the Metro Nashville Jail on June 1st, charged with driving under the influence (DUI), and possession of a handgun while under the influence. A judicial commissioner set her bond at $4,000 and the Davidson County Sheriff’s Office gave her pre-trial release from their facility.