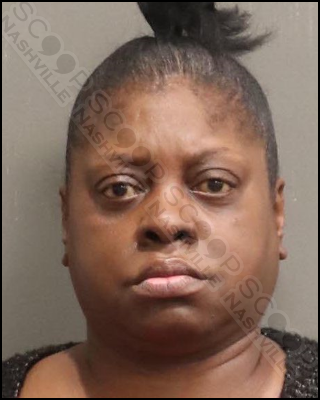 Metro Nashville Police say they’ve told 51-year-old Zelle Taylor that “general apartment noise” complaints should be handled via the apartment management company, and not the city’s police force. Officer Shaquille Graham documented this advice to Taylor in a February report after she continued to call 862-8600 and 911 to report excessive noise coming from her neighbors. When confronted during that report, she told the officer she would keep calling until the noise issues were resolved… and keep calling, she did.

From May 18th to May 28th, Taylor made 38 more noise complaints to dispatch about the same neighbor, with 33 of those calls coming in via 911, as 862-8600 routinely has hold times in the dozens of minutes. When officers responded on May 28th, they visited the apartment where she said the noise was coming from, once again describing it as the upstairs neighbors fighting, and officers say they found no disturbance. Officer Ronald Conner then took out a warrant for her arrest, charging her with aggravated misuse of 911.

Zelle Taylor was booked into the Metro Nashville Jail on May 31st, charged with making aggravated non-emergency 911 calls. A commissioner set her bond at $250, and the Davidson County Sheriff’s Office gave her pre-trial release.