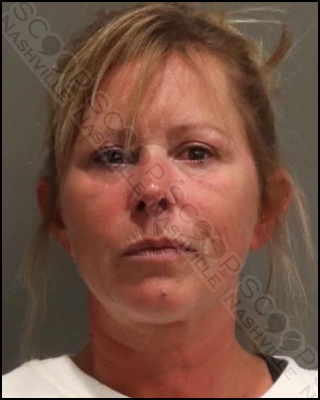 When 48-year-old Kristie Crabtree was stopped on her jet skit just outside of the party cove area of Percy Priest Lake Saturday for not having her registration number property displayed, she retrieved her registration from her dry box, which also contained several other items. TWRA Officer Joshua Landrum says he could smell marijuana coming from the box, and asked her to hand it to him, which she did. As the officer observed a blunt in the box, he asked her how much she had smoked that day. In response, Crabtree immediately grabbed the small mostly smoked blunt and tossed it into the water, destroying the evidence — while stating “oh, that’s just a little thing!” Crabtree admitted to smoking every morning when she wakes up and that she had alcohol she was currently drinking while operating the jet ski.

Kristie Crabtree, of Music Mountain Lane in Woodbury, TN, was booked into the Metro Nashville Jail on June 4th, charged with boating under the influence (BUI), implied consent, drug possession, and a boating identification violation. A commissioner set her bond at $4,100, and the Davidson County Sheriff’s Office gave her pre-trial release from their facility.