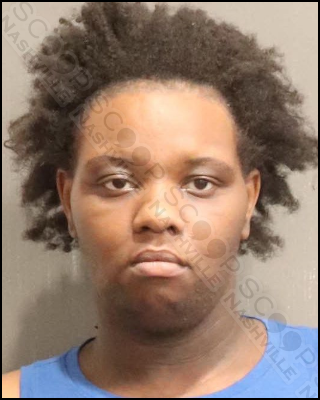 23-year-old Thomesha Pointer now faces a felony burglary charge after Metro Nashville Police responded to the Dickerson Pike Walmart on June 7th, where loss prevention had observed Pointer put $110.97 worth of merchandise in a shopping cart and push it past all points of sale without paying for it. Loss prevention provided MNPD with a trespass notice, which Pointer had signed on March 18th, for all Walmart properties, which elevated the charge from petty theft to felony burglary.

Thomesha Nicole Pointer was booked into the Metro Nashville Jail on June 7th, charged with felony theft and an outstanding warrant charging her with harassment of a former roommate. A commissioner set her bond at $5,500 and the Davidson County Sheriff’s Department gave her pre-trial release from their facility.