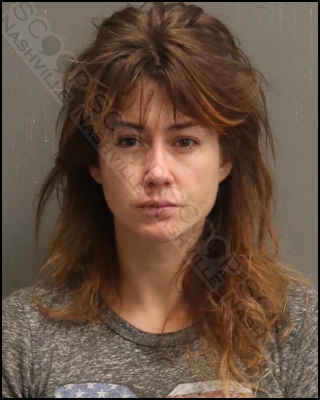 Nashville Police say 36-year-old Nashville musician Hannah Fairlight Schleuder had dinner and drinks at an East Nashville restaurant Wednesday evening with her two children, and when finished she placed them in the minivan with her and proceeded to play what can only be described as a game of drunken bumper cars in the parking lot of the location at 3917 Gallatin Pike. Officers arrived to find the front bumper of her own vehicle ripped off and lying on the pavement.

Hannah Fairlight had hit multiple vehicles in the parking lot, including the vehicle of one man who took the keys from her and brought them to the restaurant manager, reporting she was drunk driving in the parking lot with her two children in the vehicle. She was so intoxicated she was unable to properly provide police with the names and birthdays of her two children in the vehicle with her, ages 2 and 6. She claimed one of her children was born in the year 2025. She was charged with DUI 2nd (she has a prior Williamson County conviction from 2019), and two counts of felony child endangerment. She is free on a $32,000 bond.

Hannah Fairlight Schleuder, of Hutson Ave in Nashville, was booked into the Metro Nashville Jail on June 8ther, charged with DUI 2nd with a child and two counts of aggravated child endangerment. She is free on a $32,000 bond.