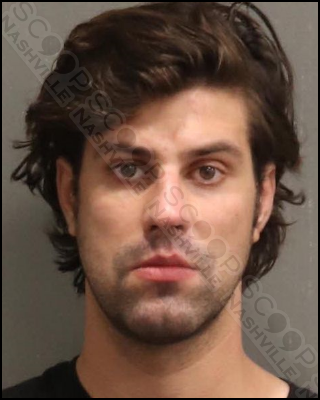 29-year-old Nicholas Conrad crashed his vehicle on Ellington Parkway early Wednesday morning and then began walking down the roadway away from the scene. Officers located him as they were responding to the call, near Broadmoor Drive & Ellington Parkway. He reportedly reeked of alcohol and was very unsteady on his feed. In his possession, while walking, were not only the keys to his Nissan Versa, but he also brought the owner’s manual along for the walk. Though Conrad refused all field sobriety testing, he admitted he “made a mistake” and asked officers if he could just “sleep it off?”

Nicholas F. Conrad, of Riverwood Drive in Nashville, was booked into the Metro Nashville Jail on June 8th, charged with driving under the influence (DUI) and violation of the implied consent law. He is free on a $3,000 bond.