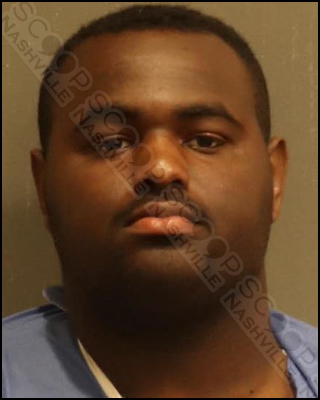 19-year-old Stevarius Midgett was upset over the work 29-year-old Tony Hutcherson had completed on his Honda sedan. When he showed up at his Gallatin Pike repair shop on Saturday he pulled an “assault-style rifle” to intimidate the man, according to police, but didn’t fire it. As he returned to his car to leave, Hutcherson, who is a convicted felon, pulled a handgun from his waistband and fired into his car, striking the customer in his torso. Both men were jailed.

Stevarius Midgett arrived at 1254 Gallatin Pike South around Noon on June 11th in his Honda sedan to confront Tony Hutcherson at his place of business, an auto repair shop. He met with Hutcherson, and was visibly upset over the work he performed on his vehicle. During the dispute, Midgett retrieves an “assault-style” rifle from his Honda, according to police, but then returns to his car without firing any shots, and the dispute apparently ended, as Midgett was leaving the business. Hutcherson then pulls a handgun from his waistband and begins shooting into the vehicle approaching it as it’s leaving, striking Midgett in the torso.

Tony S. Hutcherson, of Maudina Ave. in Nashville, was booked into the Metro Nashville Jail on June 11th, charged with aggravated assault and felon in possession of a weapon. He is free on a $40,000 bond.

Stevarius Midgett, of Rio Vista Drive in Madison, was booked into the Metro Nashville Jail on June 11th, charged with aggravated assault with a deadly weapon. He is free on a $50,000 bond.