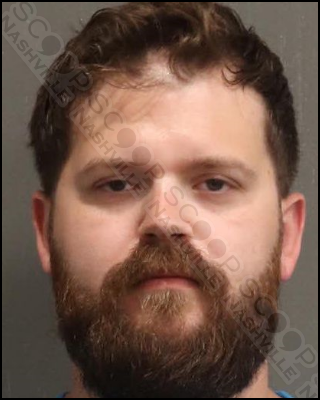 26-year-old Alexander Schiele was booked into the Metro Nashville Jail Tuesday on an outstanding warrant charging him with the domestic assault of his girlfriend, Quinn Rae Walker. Security at the Riverhouse apartments received a noise complaint about their apartment at just after 1 a.m. on May 18th which stated the couple was arguing loudly. They did not answer the door for the courtesy officer, however, security footage was reviewed the following day and it showed Schiele and Walker in an argument as they are entering the elevator at 1:02 a.m. He then puts his hands across the elevator, blocking Quinn from exiting as the argument continues. He then reportedly walks toward her aggressively as she is seen on the video putting her hands up to block him. He continues forward while aggressively backing her into the elevator wall.

Alexander Schiele, of AJ’s Good Time Bar in Nashville, was booked into the Metro Nashville Jail on June 14th, charged with domestic assault with provocative or offensive contact. He is free on a $2,000 bond.