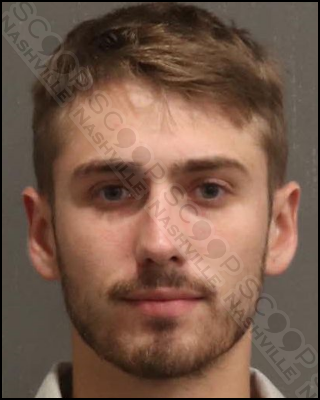 Metro Nashville Police conducted a sobriety checkpoint which 25-year-old Austin Parker Suedekum approached late Friday night on Franklin Pike. As Suedekum drove into the checkpoint, Officer Diamond could immediately smell marijuana coming from the vehicle. Suedekum not only admitted to recently purchasing marijuana but also to consuming “two drinks” prior to driving.

A police report notes that Suedekum‘s breath reeked of alcohol, and he had dilated pupils and body tremors. He performed poorly on field sobriety tests, and though he initially agreed to a blood test, his father arrived at the scene to pick up the vehicle, and after speaking to his father he revoked consent. A night court magistrate approved a search warrant for Suedekum’s blood to be drawn, and it was carried out at Metro General Hospital.

A search of the vehicle resulted in police finding a marijuana grinder and approximately 13 grams of marijuana, in the location Suedekum told officers it would be inside the vehicle.

Austin Parker Suedekum, of Dekemont Lane in Brentwood, was booked into the Metro Nashville Jail on June 18th, charged with driving under the influence (DUI), drug possession, and unlawful use of drug paraphernalia.