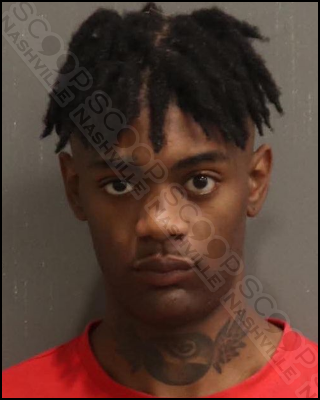 Metro Nashville Police Department detectives have now charged a total of five individuals on felony reckless endangerment charges for pulling guns and concealing themselves in a Bell Road apartment complex breezeway on the night of June 11 when two men were fatally shot in the parking lot. Police say the actions of the five, recorded by video surveillance, appeared consistent with an attempt to commit an ambush.

The latest three arrests occurred Tuesday night on McKinnie Avenue after detectives surveilling the location saw Ladarien Johnson, 19, Robert Lee Evans Jr., 18, and a 17-year-old arrive.  All were among the armed individuals who were at a swimming pool party at Cambridge at Hickory Hollow Apartments, 660 Bell Road, when a dispute resulted in dozens of shots being fired and three men being hit, two fatally.

At the time of his arrest last night, Johnson was free on a $74,000 bond stemming from his arrest in May 2021 on a charge of especially aggravated robbery. His new bond on the reckless endangerment charge is set at $50,000, and he currently remains jailed. Evans is jailed in lieu of a $25,000 bond.

Arrested last week on felony reckless endangerment charges in the case were Avion Ramsey, 21, who is free on a $35,000 bond, and Chance Vaughn, 20, who is free on a $5,000 bond.  Detectives are still looking for a sixth defendant, Jalem Buford, 20, the twin brother of deceased victim Kalem Buford.

The MNPD alleges that the actions of this group, drawing guns with the appearance of trying to surprise and shoot adversaries, endangered persons in the apartment complex, served no lawful purpose, and were reckless.

The deceased, Demontae Darden, 18, and Kalem Buford, 20, are both seen on surveillance video also carrying guns at the complex.  The investigation into their homicides is continuing.