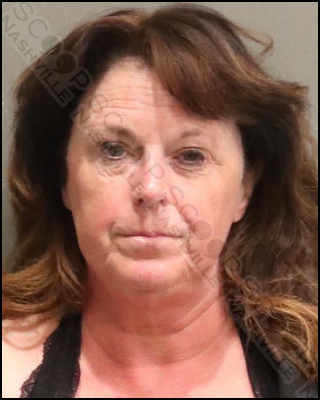 Metro Nashville Police Officers working the Entertainment District Initiative in downtown Nashville encountered 57-year-old Sara Zanish Connor in the early hours of Sunday morning near Rippy’s Bar. She appeared obviously intoxicated and was wildly swinging her arms and fists at other patrons walking by and yelling and cursing at strangers. Officers say she was “covered in what can reasonably be concluded to be vomit” and deemed her to be unable to care for herself.

Sara Marie Zanish (Connor) was booked into the Metro Nashville Jail on June 19th, charged with public intoxication. A judicial commissioner set her bond at $100.