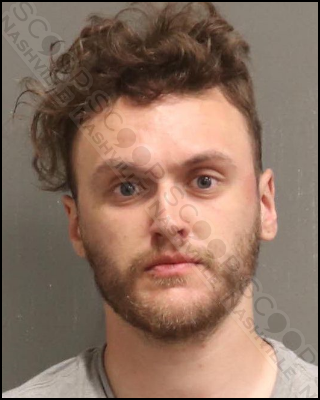 Metro Nashville Police initially encountered 24-year-old Devin Lunsford on June 26th when he was asked to leave his halfway house and became hostile with other roommates and they contacted police. He appeared to be intoxicated and was eventually transported to the hospital for treatment in lieu of arrest. Everyone went about their way, and later that day Lunsford discharged himself from the hospital and called his father and made concerning statements about his own well-being. Nashville Fire medical and police then encountered him once again and attempted to convince him to return to the hospital, however, he refused all assistance. Lunsford then made threats to “fight everyone” while kicking a stranger’s vehicle and cycled from appearing sleepy and nodding out to disruptive and combative. He then retreated to his own vehicle, and refused to exit — laughing at officers and asking “are we about to fight right now?” He was ultimately removed from the vehicle by force and cuffed while telling officers “I’ll fuck you up if you don’t take these cuffs off!” while kicking, spitting, and yelling in the back of the police cruiser.

Devin Lunsford, of Bel Aire Drive in Franklin, was booked into the Metro Nashville Jail on June 26th, charged with disorderly conduct and resisting arrest. A judicial commissioner set his bond at $750, and the Davidson County Sheriff’s Office gave him pre-trial release from their facility.