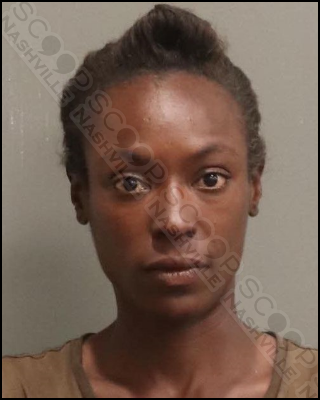 36-year-old Alycia Stewart pulled Jenario Thornton, a downtown partnership ambassador, to the ground near 4th & Broadway as she grabbed him by the collar of his shirt, refusing to let him go as he was riding by on a Segway. He suffered scrapes to his knees as a result of the assault. Witnesses provided a video that showed Stewart appearing to be under the influence of a drug, and a search of her bag incident to arrest resulted in what appeared to be a crack pipe. As officers responded to the scene she declared “I’m high, take me to jail!”, and they obliged.

Alycia Stewart was booked into the Metro Nashville Jail on June 30th, charged with assault with bodily injury, public intoxication, and possession of drug paraphernalia. A judicial commissioner set her bond at $4,100.