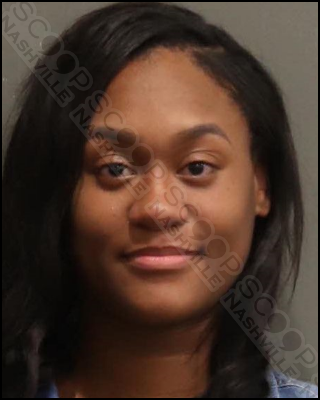 As Nashville Airport Police were responding to a medical emergency call at gate C22 Saturday afternoon, and simultaneously there was a drunk and disorderly person call near the same area. As officers and medics were tending to the first call and speaking to the passenger, the person from the drunk & disorderly call, identified as 29-year-old Brittnie Dodson, began to stick her iPhone in the face of first responders, demanding to be escorted out of the area. An officer broke away from the medical call to escort Dodson to a taxi, however, she kept touching the officer while filming and weaving and wobbling while attempting to walk. After she started yelling obscenities across the airport she was eventually taken into custody and charged with public intoxication and disorderly conduct.

Brittnie Tera Dodson, of W. 224th St. in Torrance, CA, was booked into the Metro Nashville Jail on July 2nd, charged with disorderly conduct and public intoxication. A judicial commissioner set her bond at $500, and the Davidson County Sheriff’s Office gave her pre-trial release from their facility.