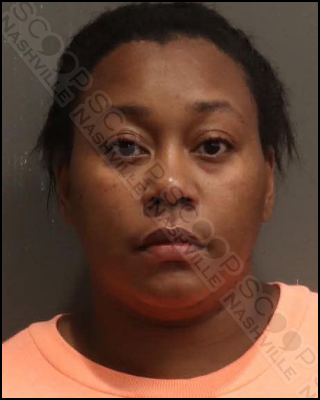 34-year-old Tiffany McCalebb faces three counts of child endangerment after Metro Nashville Police say she left her three children, all under the age of eight, in a downtown Nashville hotel room to “meet up with a friend.” Police were alerted to the situation when the front desk at the Home2 Suites by Hilton on Division Street received a call from their 7th-floor hotel room, and dispatch received a 911 call from the room, and it was just children with no adults present.

When staff went to check on the room, accompanied by police, an 8-year-old girl answered the door and was in the room with two younger siblings. She told police her mother was “out with a friend” and after many attempts, she was eventually contacted via phone. She initially told police her vehicle was broken down and left her children under the care of her brother, but later admitted that was a lie.

She then stated she left to meet up with a friend to retrieve items from her broken-down vehicle, and officers say her story changed multiple times throughout the conversations. She eventually returned to the room and was taken into custody. Dispatch received this 911 call at 6:06 p.m. and the first responding officer was on the scene at 6:29 p.m.

Tiffany Elaine McCalebb, of Fordham Street in Detroit, MI, was booked into the Metro Nashville Jail on July 4th, charged with three counts of child endangerment. She is free on a $3,000 bond.