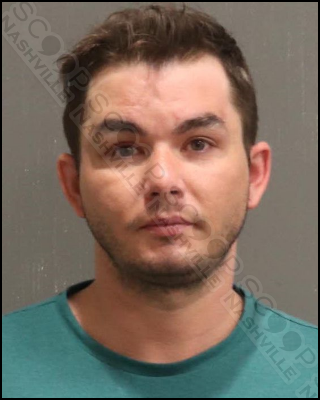 Kirsten Carter says her boyfriend, 33-year-old Brandon Glass, began to bite her after they went to bed on July 3rd, in an attempt to initiate sex after the couple had been drinking all evening. She told him to stop biting her, and hit him. She says he then pulled her hair, and everything went black. Carter says the next thing she remembers is waking up naked on July 4th with bite marks all over her body, bruises on her legs, back, and torso, two black eyes, and a busted lip. Additionally, she had red marks on both sides of her neck/throat and it appears as if her air and blood flow had been restricted for a period of time. When first responders arrived, she was still seeing spots and flashes of light, and had a raspy voice and a hard time swallowing. She was transported to a local hospital for treatment and Brandon Glass was charged with felony aggravated assault/strangulation.

woke up on the morning of the 4th of July

Brandon Alan Glass, of Old Hickory Blvd in Nashville, was booked into the Metro Nashville Jail on July 6th, charged with aggravated assault/strangulation. A judicial commissioner set his bond at $50,000.