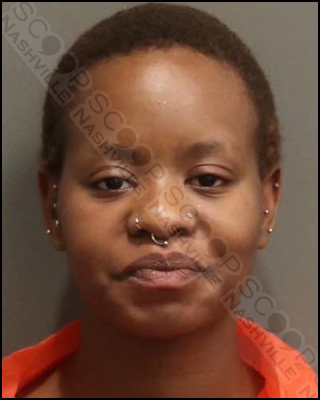 Derrick Battle called police just before 2 a.m. on July 7th stating that 26-year-old Emmie Davidson was trying to leave their apartment naked while she was extremely intoxicated. He reports she scratched him and continued to assault him as he tried to not let her leave while drunk and indecent. She then flashed responding officers.

Officers arrived and documented scratch marks all over the victim’s back. She told police she assaulted him because he was not letting her leave the home. As the investigation continued, Davidson, who was now wearing a bathrobe, repeatedly flashed officers stating “it’s just a body” and then completely stripped naked again and walked outside of the apartment.

Emmie A Davidson, of Sonya Drive in Nashville, was booked into the Metro Nashville Jail on July 7th, charged with domestic assault with bodily injury. She is free on a $2,000 bond.