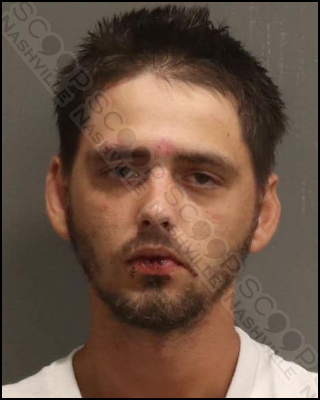 24-year-old Justice Vance faces multiple charges after he swerved into the oncoming lane of travel on Hobson Pike and collided head-on with another vehicle. Instead of stopping, he drove his truck, with only a rim remaining on the right front, until it wouldn’t drive anymore and abandoned it at Murfreesboro Pike and Hamilton Church Pike. Vance then stumbled to a nearby field, where he eventually passed out, leaned up against a fence pole. Multiple bystanders and witnesses would direct officers to the crash site(s), and his final escape route until officers caught up with him as he eventually came to. He denied being in a crash but eventually admitted to drinking, and a half-empty bottle of Crown Royal was found in his truck.

Justice C. Vance, of 3536 Stagner Road in Joelton, was booked into the Metro Nashville Jail on July 10th, charged with driving under the influence (DUI), violation of the implied consent law, leaving the scene of an accident, reckless driving, and driving on a revoked license. He is free on pre-trial release.