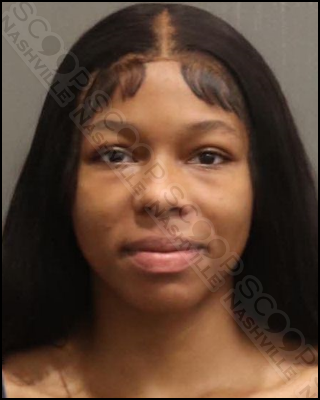 18-year-old Monae Ford was jailed this week on an outstanding warrant after she showed up at the home of the grandparents of her ex-boyfriend, Terry Waters, and lured him outside in May, where she hit and spit on him. She initially claimed she was pregnant when she arrived, but no one believed her, and everyone went about their day, so she then grabbed a brick and acted like she was going to damage the victim’s car, which caused him to exit the back door of the home and approach her. Ford took the opportunity to hit and spit on her ex-boyfriend and then run inside the unlocked back door and ransack a path to the front door, knocking over items along the way before fleeing again out the front door. Officers say she has an “extensive” domestic violence history, and they issued a warrant for her arrest.

Monae M Ford, of Prince Ave in Nashville, was booked into the Metro Nashville Jail on July 11th, charged with domestic assault. She is free on a $1,500 bond.