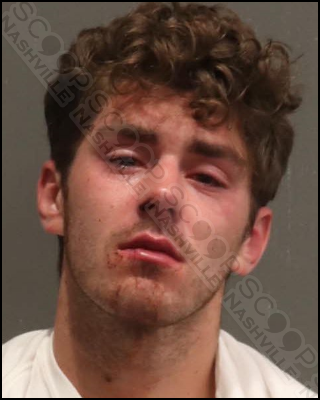 22-year-old Ethan Schaaf, the son of two prominent Paducah lawyers, and himself an aspiring lawyer, told Metro Nashville Police Officers, “Who are you telling to go home?!?” before shoving an officer and “landing a thick amount of bloody spit” on another officer once he was in custody.

Metro Nashville Police Officers working the Entertainment District Initiative in downtown Nashville initially responded to 5th & Broadway to break up a scuffle between Schaaf and another person. The two tourists were told to walk it off, go home, and leave the area to diffuse tensions. Schaaf, 22, turned to one of the responding officers and defiantly asked who the officer was telling to go home and shoved the policeman.

As officers moved to take Schaaf into custody for assault on an officer, Schaaf refused to give up his hands and pulled away. He was eventually cuffed, and while being escorted to a patrol car for transport, Schaff used his shoulder to shove into officers to prevent them from placing him inside the vehicle. As he was being placed in the pack of the car, Schaaf spit on officers and “landed a thick amount of bloody spit” on officers, according to an arrest warrant.

Ethan Edward Schaaf, of Highlands Drive in Paducah, KY, was booked into the Metro Nashville Jail on July 16th, charged with public intoxication, disorderly conduct, resisting arrest, and two counts of assault of an officer. He is free on a $16,000 bond.