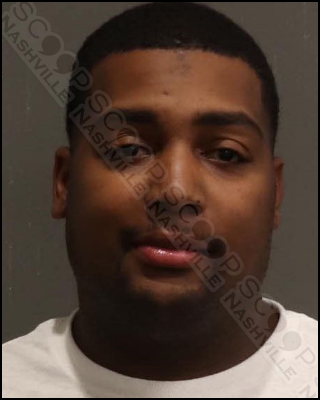 29-year-old Nashville Firefighter Justin Blackburn was driving 60 mph in a 40 mph zone on Dickerson Pike and swerving out of his lane multiple times as police pulled him over just before midnight Wednesday. Blackburn, who reeked of alcohol, made jokes about “eating cookies while driving,” denied drinking any alcohol, and later admitted his cookies joke wasn’t funny. After failing field sobriety tests, and as he was being placed into custody, Blackburn began to make it known he was a Nashville Fire Fighter and repeatedly stated he should be shown respect and the officer should just follow him home instead of arresting him.

Inside the vehicle, officers found an empty 24oz can of Bud Light Platinum and an empty 12 oz can of hard seltzer. Once in the back of the car, Blackburn says he had “one beer, maybe 5-6, or 4, or 3, or maybe 2 hours ago.” He also admitted to drinking mimosas earlier in the day. He was transported to Metro General for a blood draw and then to booking.

Justin Kenard Blackburn was booked into the Metro Nashville Jail on July 21st, charged with driving under the influence (DUI). A judicial commissioner set his bond at $2,500, and the Davidson County Sheriff’s Office gave him pre-trial release from their facility.