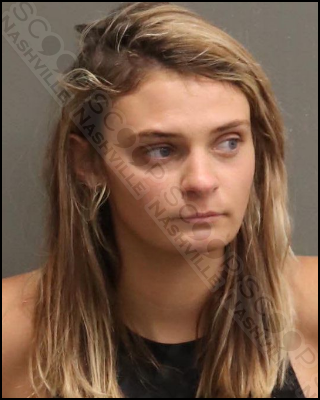 Police responded to a domestic disturbance call on Muphy Road and as they were investigating, one of the involved parties, 23-year-old Lauren Duke-Powers, returned to the scene. As they began to interview her near the front walkway to the home, it became apparent she was extremely intoxicated, with her being unable to stand without swaying, and slurring her speech. She continued to curse and yell at the other involved parties. Officers advised her she was being detained while the domestic call was investigated, at which time she walked away toward the home and resisted when officers attempted to grab her arms to keep her away from the other parties. She then kicked Officer Meskers in his right knee, and as they took her to the ground in the prone position, she attempted to bite Officer Meskers’ right thigh.

Lauren Duke-Powers, of Murphy Road in Nashville, was booked into the Metro Nashville Jail on July 15th, charged with assault of an officer, public intoxication, and resisting arrest. She is free on a $2,600 bond.