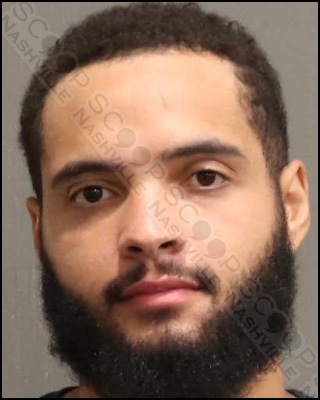 Just after 1:30 a.m. Friday, officers working the Entertainment District Initiative in downtown Nashville observed 26-year-old Cameron Mowrer just outside 404 Broadway, where he was refusing to leave the location, pushing the security staff, and appeared intoxicated. After he continued to refuse to leave, he was taken into custody for public intoxication but refused to be seated in the transport car. Several officers placed him into the vehicle, and he was transported to booking where he refused to exit and had to be removed from the vehicle by multiple officers. He was then forced off the floor while still resisting, and taken inside to booking.

Cameron Lynn Mowrer, of Jester Court in Clayton, NC, was booked into the Metro Nashville Jail on July 22nd, charged with public intoxication, resisting arrest, and disorderly conduct. A judicial commissioner set his bond at $2,500, and the Davidson County Sheriff’s Office gave him pre-trial release from their facility.