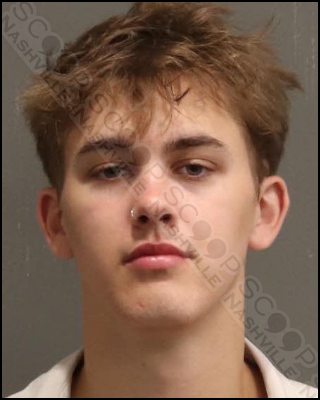 Just after 1 a.m. Sunday morning, Metro Nashville Police Officers working the Entertainment District Initiative were approached by a group of women who stated an unknown man was following them and continued to interact with them after they told him to stop and go away – this happened near the Margaritaville Restaurant. Officers observed the man, later identified as 21-year-old Chase Holm, and advised him to continue about his night away from the women. Holm reportedly refused to leave the area, and was extremely intoxicated when confronted by officers. He was transported to booking and puked in the back seat of the transport car before passing out during the short ride.

Chase Holm was booked into the Metro Nashville Jail on July 24th, charged with public intoxication. A judicial commissioner set his bond at $500.