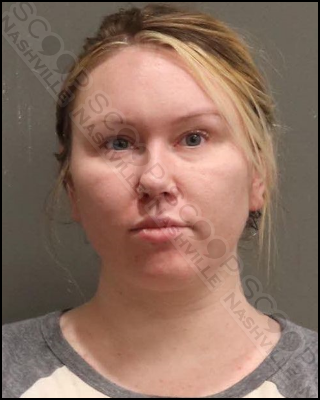 Metro Nashville Police responded to a motor vehicle crash near Gallatin Pike & Carolyn Ave, where they found 32-year-old Chelsea Hardy behind the wheel of one of the involved vehicles. She stated she had no idea how the crash occurred and had constricted pupils and the odor of urine on her clothes. Field sobriety tests had to be terminated due to her level of intoxication. Hardy admitted to drinking “two margaritas” and taking an Ambien “last night.”

Chelsea L. Hardy, of Straightway Ave in Nashville, was booked into the Metro Nashville Jail on July 26th, charged with driving under the influence (DUI). A judicial commissioner set her bond at $3,000, and the Davidson County Sheriff’s Office gave her pre-trial release from their facility.