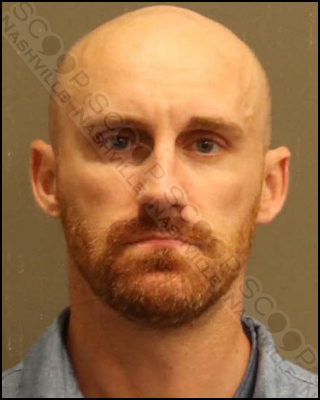 Ashley Mattingly and her husband, 35-year-old Gregory ‘Alan’ Mattingly, are in Nashville on vacation this week, and on Thursday morning, ‘Alan’ found himself in a Nashville jail cell. The couple was out drinking Wednesday night, and as they were returning to the JW Marriott Nashville hotel, Ashely says she attempted to help guide her husband, who was very unsteady on his feet, to the room, which upset him in his extremely intoxicated state. He reportedly became extremely angry and punched his wife square in the face with his fist, sending her to the hospital for treatment. He returned to the hotel room and locked her out, leaving her injured in the hallway for staff members to find.

Gregory Alan Mattingly, of Short Bow Ct in California, MD, was booked into the Metro Nashville Jail on July 28th, charged with domestic assault with bodily injury. He is free on a $2,500 bond and the state-mandated 12-hour hold for domestic violence.