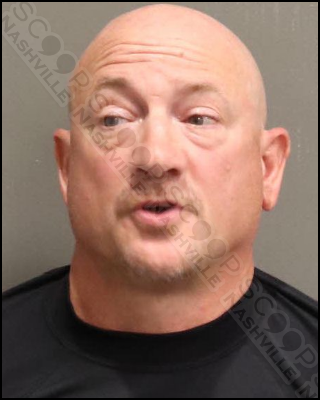 TWRA Officer Joshua Landrum was attempting to make his bother proud Saturday when his eagle eyes alerted to a jet ski that had “stencil outline” letters for the boat ID, instead of the reportedly TCA required “block letters in contrasting colors,” also noting there was not the proper spacing between the letters. As his adrenaline pumped at the possibility of violations and fines he could issue before the season ends, the wildlife enforcement officer had his biggest moment of the day and initiated a stop on the vessel, which was operated by 52-year-old Christopher Ferrara. He asked Ferrara how long he had been out and how much he had to drink, to which Ferrera replied “man, we have been out here all day having fun,” — a concept possibly not fully understood or appreciated by Landrum. Ferrara completed field sobriety tests, which he reportedly performed poorly on. He refused blood or breath testing and was jailed for BUI, implied consent, and those pesky boat identification numbers.

Christopher Allen Ferrara was booked into the Metro Nashville Jail on July 30th, charged with boating under the influence (BUI), violating the implied consent law, and a boating identification violation. A judicial commissioner set his bond at $2,000, and the Davidson County Sheriff’s Office gave him pre-trial release from their facility.