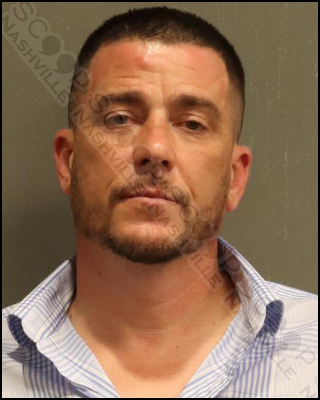 46-year-old Shawn Daniels stumbled out of a bar and onto the curb of Broadway in downtown Nashville Friday night and braced himself against a vehicle on the street. Inside the car was two individuals, one of them a 16-year-old male. They yelled for the man to get off the vehicle, and words were exchanged, which resulted in Daniels reaching through the window, striking the juvenile in the face, and pulling him by the shirt. As the two individuals in the car were exiting to confront the man, Metro Nashville Police Officers observed and intervened, placing Daniels under arrest. He admitted to being intoxicated during the assault.

Shawn Michael Daniels of Crenshaw Lake Road in Lutz, FL, was booked into the Metro Nashville Jail on July 29th, charged with assault and public intoxication. A judicial commissioner set his bond at $2,600, and the Davidson County Sheriff’s Office gave him pre-trial release from their facility.