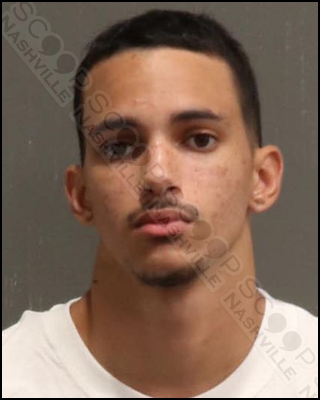 19-year-old Jacob Brewster says he was inside a residence at the Hillmeade Apartments late Friday night with some friends after bringing them home and drinking some tequila with them. He says he “got in his feelings” about a situation and decided to leave. He was too intoxicated to drive home and decided to sleep in his vehicle in the parking lot. Before sleeping, he continued to drink from a bottle of vodka in the car.

A short time later, around 1:30 a.m. Saturday, Metro Nashville Police responded to an unrelated shots-fired call at the complex and came across Brewster in the parking lot, who was now slumped over the driver’s seat with the car running and the door wide open. Brewster was unresponsive for several minutes with vomit both inside and outside the car and all over himself. Officers were able to turn off the car, and Brewster eventually woke up and tried to put the car in gear and leave. He eventually blew a 0.123% BAC on a breathalyzer.

Jacob W. Brewster of Amberwood Circle in Nashville, TN, was booked into the Metro Nashville Jail on August 6th, charged with driving under the influence (DUI). A judicial commissioner set his bond at $2,000, and the Davidson County Sheriff’s Office gave him pre-trial release from their facility.