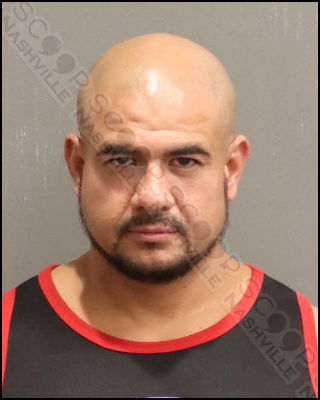 41-year-old Raymond Flores was the subject of a disorderly person call outside of Luke Bryan’s Bar on Broadway in downtown Nashville early Saturday morning. He was reportedly becoming aggressive and threatening toward an unknown female at the location. Officers arrived to find him yelling and screaming at the woman and grabbing the back of her head while yelling at her. As officers attempted to place him into custody, he became aggressive with officers, who had to use force and “joint manipulation techniques” to get him cuffed. He told officers he was “very” drunk, and when asked to elaborate on the amount he had to drink, he stated “a lot!” He was placed into custody and transported to booking.

Raymond Flores of Adrian, MI, was booked into the Metro Nashville Jail on August 6th, charged with public intoxication and resisting arrest. A judicial commissioner set his bond at $1,100, and the Davidson County Sheriff’s office gave him pre-trial release from their facility.