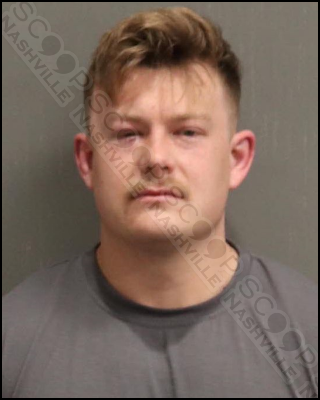 28-year-old Former Marine turned National Guard Recruiter Taylor Stoeckman was jailed late Monday night after security at Nashville Underground on Broadway in downtown Nashville had to take him to the ground and hold him there until police arrived. Stoeckman was reportedly extremely intoxicated, which resulted in him being denied entry to the venue. Despite his continued shouting and unruly behavior, and complaints of not being able to see, he refused medical treatment. Officers then attempted to call his friends to come and get him, but Stoeckman was unable to unlock his phone. Officers asked him to sit down while they attempted other methods to contact his friends, but he became even more unruly. He was then advised he was being taken into custody, at which time he assumed a fighting stance and used his body to prevent from being placed into the patrol car. He then threatened to strangle the arrested officer to death, and once at booking, he continued to resist going into the building.

Taylor Neil Stoeckman of Quarry Drive in Center City, MN, was booked into the Metro Nashville Jail on August 8th, charged with public intoxication, disorderly conduct, and resisting arrest. A judicial commissioner set his bond at $1,000, and the Davidson County Sheriff’s Office gave him pre-trial release from their facility.