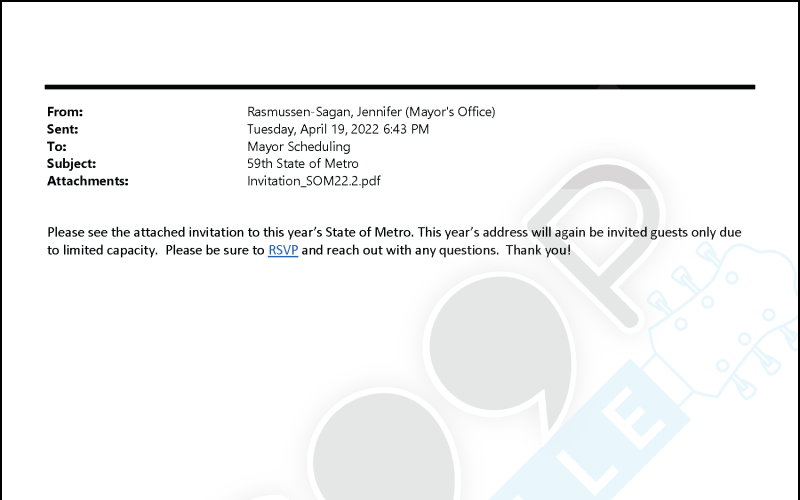 In April, Nashville Mayor John Cooper provided the yearly ‘State of Metro’ address to the citizens of Nashville, which is required by the city charter to be open to the public. While the administration claims no one was turned away or denied an invitation, a newly fulfilled open records request details people who were told they could not attend, citizens who were turned away at the door because they were not on the invitation list, and a directed change of the announcement text making it ‘invite only’ and specifically not open to the public. The Mayor’s Chief Communications Officer TJ Ducklo claims none of this ever happened, despite the newly released administration emails detailing the denials.

The city charter states: “Not later than May 25 of each calendar year, the mayor shall personally address the metropolitan council on the state of the Metropolitan Government of Nashville and Davidson County in a metropolitan facility at a specially called meeting of the council that shall be open to the public.”

TJ Ducklo told Scoop: Nashville in a recorded phone call about April’s State of Metro address by Mayor John Cooper: “The event was open to the public, so I apologize if you or anyone else had the impression that we didn’t want you or someone from your site to come, it was open to the public, anyone could have come, so I don’t know if there was a miscommunication or what there, but anybody who walked up to the event could have walked right in…”

Ducklo’s statement is directly contradicted by nearly a gigabyte of emails obtained by Scoop: Nashville for the month of April from various individuals and group mailboxes related to the Mayor’s Office, including Ducklo, Advisor Benjamin Eagles, Scheduling assistant Codi Drake, Digital Director Brandon Marshall, Mike Jameson, and Chief of Staff Jennifer Rasmussen-Sagan — who kicked off this series of events as the first person to declare this year’s event would be invite-only in an email on April 19th:

Soon after the first invitations went out, Jennifer realized the invitation did not specify the event was invite-only, as people were openly sharing the invitation amount email lists and their own officers, and the Mayor’s office was receiving RSVPs from people they had not invited. She quickly directed Codi to update the invitation to the new version (below), which would not include verbiage that the event was limited to invited guests, elected officials, and (selected) media.

A quick note from Mike Jameson that he didn’t believe the invites should come from the new kid in the office, and Jennifer was back to sending them herself, leaving Cody responsible for receiving the RSVPs and comparing them to the list of invitees — which the administration claimed didn’t exist and denied it’s existence to multiple people who asked, including a reporter at the Nashville Scene. A full list of invitees in email and excel form was received in a data dump from the Mayor’s office to Scoop: Nashville. We provided that information to the Scene since they were denied it by the administration several weeks prior.

The guest list for the State of Metro Address was so tightly controlled that even an actual forwarded invitation wouldn’t get you in the door. After Katy Varney of MP&F Strategic Communications attempted to RSVP from an invitation she was forwarded from someone in her office, she was quickly told by the Mayor’s Scheduling Assistant, Codi Drake, that she wasn’t on the guest list and he wanted to know who had leaked the invitation outside of the guarded guest list while failing to confirm her to attend.

The Mayor’s Chief of Staff, Jennifer Rasmussen-Sagan, replied in a snarky email to ask “who she is attending with” as she was not in the list of invited guests:

Tamika Hudson, an Assistant Dean at Vanderbilt, was one of those folks who replied to an invitation that was shared in the office, and despite RSVPing, once she arrived at the State of Metro, she wasn’t on the list and was denied entry. Despite a follow-up email from Jennifer who assured her this was a mistake, Jennifer asked someone to print copies of the “Invited Attendees” list from an excel file so they could be compared at the entry on the day of the speech.

At the end of the day, the State of Metro, which is required to be an open public meeting, turned out to be a meeting of the Mayor’s friends and the city’s elite. A few citizens were allowed in just before the speech started just to fill some standing space, but the majority of ‘regular’ Nashville citizens who attempted to attend were denied this right by Mayor John Cooper’s administration.

The Mayor’s office did not reply to a more recent request for comment on this story other than the above-referenced April phone call with TJ Ducklo in April.